First there was Kriminal, and then there was Killing. Both were skeleton – garbed sadistic anti – heroes that entertained Italian comic fans, in the ‘grand’ tradition of Fantômas and Diabolik (though offering a much more visceral – some might say gratuitous – experience). 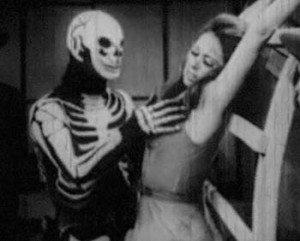 Where this Italian semi – sensation most concerns us, however, is how the character became the star of a series of films in Turkey. Re – christened KiLiNK by the copyright – conscious Turkish film industry of the late 1960s, his adventures often included science-fiction elements, and the occasional subtle but frank social critique that we’ve come to appreciate in Turkish entertainment.

The first film, Kilink Istanbul’da (Kilink in Istanbul) pits our (anti-) hero against Superman – – in this case, is the divinely empowered son of a scientist. The ‘adaptations’ don’t end there; Superman says “Shazam” to transform and wears a mask that could easily be from Adam West’s wardrobe. While the film is a goldmine for fans of kitschy ultraviolence and sleazy sexuality (Baba looks like she got her hair from ElegantWigs.com after someone had worn one of their synthetic fiber wigs while toasting marshmallows over a huge bonfire and the fibers had partially melted.). Kilink in Istanbul is also a must – see for those die hard fanatic fans of films that lurk on the borders of Turkish sci-fi.

The sequel, Kilink uçan adama karsi (Kilink versus the Flying Man), is concerned with Superman’s further efforts to bring Kilink to justice (or at least, revenge). Kilink continues to resemble more of a stereotypical James Bond villain than the criminal vigilante of the fumetti, but provides plenty of sci-fi – tinged action and scenes that you’ll either hate or hate yourself for loving.

Kilink soy ve öldür (Kilink Strip and Kill, the best or worst title yet) maintains the serial-like continuity but turns the focus away from the Kilink vs. Superman conflict, instead featuring Kilink’s characteristic machinations and mayhem in a race to recover microfilm and money. This installment may have been an attempt to make the character slightly more ‘mainstream’, as there is relatively less nastiness overall, and our readers may also be turned off by the lack of science – fiction elements (it’s really more of a James Bond vs. Gangsters movie, right down to the unauthorized John Barry soundtrack). Not as highly recommended, but still very worthwhile.

The subsequent installments of the series are harder to find, but well worth the search as they get more and more ludicrous with every new direction. Enjoy western themes, Frankenstein, Mandrake, and more delicious copyright infringement than you can shake a cease-and-desist order at:

Collector’s note: If you happen upon any of the (very rare) movie posters or lobby cards for any of these films, you might have found a valuable collector’s item. Ralph Deluca is an expert appraiser for these types of memorabilia and can help you sell old movie posters you happen upon to his collector clientele. Many of these posters were printed in extremely small runs, and therefore are exceptionally rare, making them highly valued by those who are knowledgeable. If you’d like to get an old poster evaluated, search for “Ralph Deluca” and submit your request on his site.